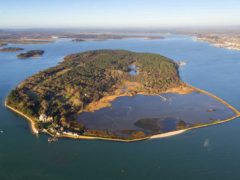 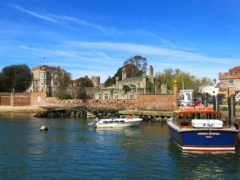 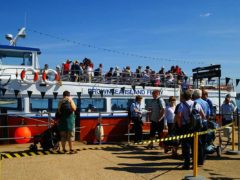 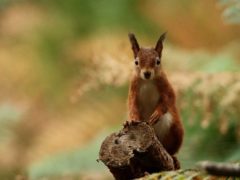 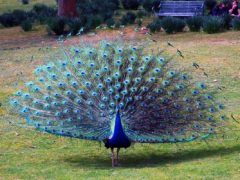 Brownsea Island (archaically known as Branksea) is the largest of eight islands in Poole Harbour, on the south coast of Dorset. The island is owned by the National Trust with the northern half managed by the Dorset Wildlife Trust. Much of the island is open to the public (see opening dates/times below) and includes areas of woodland and heath with a wide variety of wildlife, together with cliff top views across Poole Harbour and the Isle of Purbeck.

The island was the location of an experimental camp in 1907 organised by Lieutenant-General Baden-Powell that led to the formation of the Scout movement the following year.

The entire island, except the church and a few other buildings which are leased or managed by third parties, is owned by the National Trust. Most of the buildings are situated near the small landing stage. The northern portion of the island is a Nature Reserve managed by Dorset Wildlife Trust and an important habitat for birds; this part of the island has limited public access. A small portion to the southeast of the island, along with Brownsea Castle, is leased to the John Lewis Partnership for use as a holiday hotel for staff, and is not open to the public.

Wildlife on Brownsea
The island is one of the few places in southern England where indigenous red squirrels survive, largely because non-native grey squirrels have never been introduced to the island. The Brownsea red squirrel population is the only population known in the UK to carry the human form of the bacteria stem Mycobacterium leprae that causes leprosy in humans. Brownsea also has a small ornamental population of peacocks. The island has a heronry, in which both grey heron and little egret nest.

There is a large population of non-native sika deer on the island. In the past the numbers have been higher than the island can sustain and have overgrazed. To try to limit damage to trees and other vegetation by deer, areas of the island have been fenced off to provide areas of undamaged woodland to allow other species such as red squirrels to thrive.

The lagoon is noted for the large population of common tern and sandwich tern in summer, and a very large flock of avocets in winter, when more than 50 per cent of the British population (over 1500) can be present.

Some imported stonework and statuary on the island serves as a habitat for a Mediterranean land snail, Papillifera bidens.

A brief History of Brownsea
The first records of inhabitants on Brownsea Island occurred in the 9th century, when a small chapel and hermitage were built by monks from Cerne Abbey near Dorchester. The chapel was dedicated to St Andrew and the only resident of the island was a hermit, who may have administered to the spiritual welfare of sailors passing through Poole Harbour. In 1015, Canute led a Viking raid to the harbour and used Brownsea as a base to sack nearby Wareham and Cerne Abbey.

In the 11th century the owner of the island was Bruno, who was Lord of the Manor of Studland. Following his invasion of England, William the Conqueror gave Studland, which included Brownsea, to his half-brother, Robert de Mortain. In 1154, King Henry II granted the Abbot of Cerne the right of wreck for the island and the abbey continued to control the interests of Brownsea for the following 350 years.

After the Dissolution of the Monasteries, control of Brownsea passed to the Crown. Henry VIII recognised the island’s strategic importance of guarding the narrow entrance to the expanding port of Poole. As part of a deterrent to invasion forces from Europe, the island was fortified in 1547 by means of a blockhouse, which became known as Brownsea Castle. In the following centuries, the island passed into the hands of a succession of various owners. In 1576, Queen Elizabeth I made a gift of Brownsea to one of her court favourites and rumoured lover, Sir Christopher Hatton. During the English Civil War, Poole sided with Parliament and garrisoned Brownsea Castle.

In 1765 Sir Humphrey Sturt, a local landowner and MP purchased the island, which in turn passed to his sons. Sturt expanded the castle and records suggest that he spent £50,000 on enhancing the island’s gardens.

Sir Augustus John Foster, a retired British diplomat, bought the island in 1840. Unfortunately Foster suffered bouts of depression and died in Brownsea Castle in 1848. In 1852 Brownsea was again up for sale and was sold for £13,000. It was purchased by William Waugh, a former Colonel in the British Army in the belief he could exploit the white clay deposits on the island to manufacture high-quality porcelain. He hoped the clay would be of the same quality as the nearby Furzebrook clay, but it turned out to be suitable only for sanitary ware.

In the 20th century the island was purchased by wealthy stockbroker Charles van Raalte who used the island as a residential holiday retreat. During this time the castle was renovated and served as host to famous visitors such as Guglielmo Marconi. Robert Baden-Powell, a close friend of the van Raaltes, hosted an experimental camp for boys on the island in the summer of 1907. At the time Brownsea was largely self-supporting, with a kitchen garden and a dairy herd.

Charles van Raalte died in Calcutta in February, 1908 and his wife eventually sold the island. In 1927 it was purchased at auction by Mary Bonham-Christie for £125,000. A recluse by nature, she ordered a mass eviction of the island’s residents to the mainland. Most of the island was abandoned and gradually reverted to natural heath and woodland. In 1934, a wild fire caused devastation after burning for a week. Much of the island was reduced to ashes, and the buildings to the east were only saved by a change of wind direction. Traumatised by the event, Bonham-Christie banned all public access to the island for the rest of her life.

During the Second World War large flares were placed on the western end of the island to mislead Luftwaffe bombers away from the port of Poole. The decoy saved Poole and Bournemouth from German bombs, but the deserted village of was destroyed.

In April 1961, Bonham-Christie died at 98 years old and her grandson gave the island to the Treasury to pay her death duties. Concerned the island could be sold to commercial developers, a campaign was started by local conservationist, Helen Brotherton, with the aim of purchasing the island to protect its natural habitats.

The National Trust subsequently agreed to take over responsibility for the island if enough funds were raised and in 1962 its purchased Brownsea for £100,000. Work was carried out to prepare the island for visitors; tracks were cleared through areas overgrown with rhododendrons and firebreaks were created to prevent repetition of the 1934 fire. The Dorset Wildlife Trust leased a nature reserve on the north of the island, the Scout and Guide Movements were allowed to return and the castle was renovated and leased to the John Lewis Partnership for use as a staff hotel.

Scouting
From 1 August until 8 August 1907, Robert Baden-Powell held an experimental camp on the island, to test out his Scouting ideas. He gathered 21 boys of mixed social backgrounds (from boys’ schools in the London area and a section of boys from the Poole, Parkstone, Hamworthy, Bournemouth, and Winton Boys’ Brigade units) and held a week-long camp.

The boys took part in activities such as camping, observation, woodcraft, chivalry, lifesaving and patriotism. Following the successful camp, Baden-Powell published his first book on the Scouting movement in 1908, Scouting for Boys, and the international Scouting movement grew rapidly.

Boy Scouts continued to camp on the island until the 1930s, when all public access to the island was forbidden by the island’s owner. After ownership of the island transferred to the National Trust, a permanent 20 hectares (49 acres) Scout camp site was opened in 1963 by Olave Baden-Powell.

In August 2007, 100 years after the first experimental camp, Brownsea Island was the focus of worldwide celebrations of the centenary of Scouting. Four camps were set up on the island including a replica of the original 1907 camp, and hundreds of Scouts and Girl Guides from 160 countries travelled to the island to take part in the celebrations.

Brownsea Island is open for winter weekends between Saturday February 1 and Sunday March 8 Mar, 10am to 4pm. From Saturday March 14 the island will be open from 10am-5pm daily until Sunday November 15 2020.
Please check with the National Trust for updates and changes ~ Brownsea Island.

Plan your winter weekend on Brownsea
Winter brings serenity to the island and at just 1.5 miles long and less than a mile wide it’s easy to explore in a day. Watch Spoonbills elegantly sweep the lagoon for food; marvel at the wintry views across the harbour or even catch a glimpse of spring time daffodils before their yellow flowers get nibbled by the Sika deer.

Young explorers can be among the first to try out the brand new play area, with balancing beams, stepping stones and dens to build. There’s plenty to do and see on Brownsea Island even on rainy days. Read more with our rainy day article.
How to get here:

The ferry fare is payable, along with your admission fee, on arrival to Brownsea Island. Entry is free for National Trust members, but ferry fares still apply.

Accessibility
Please note that there is stepped access onto the boat from the Sandbanks Jetty, so visitors must be confident at stepping in and out of the vessel unaided. Less able visitors are encouraged to come from Poole Quay.

The cafe will be open as usual for winter weekends and will close 15 minutes before last the ferry leaves at 4pm. The Engine Gift shop will also be open so why not drop in and pick up your essentials for winter wildlife spotting.