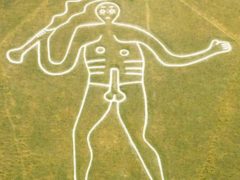 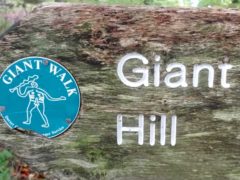 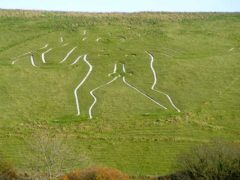 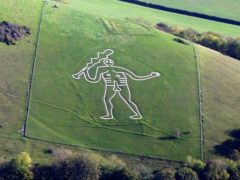 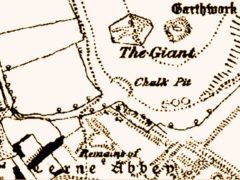 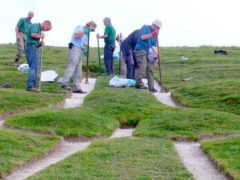 The Cerne Abbas Giant is a hill figure near the village of Cerne Abbas in Dorset, England. 55 metres (180 ft) high, it depicts a standing nude male figure with a prominent erection and wielding a large club in its right hand. The figure is listed as a scheduled monument of England and the site is owned by the National Trust.

The origin and age of the figure are unclear. It is often thought of as an ancient construction, though the earliest mention of it dates to the late 17th century. Early antiquarians associated it, on little evidence, with a Saxon deity, while other scholars sought to identify it with a Celtic British figure of the Greek Hercules or some syncretisation of the two. There is archaeological evidence that parts of the drawing have been lost over time.

The lack of earlier descriptions, along with information given to an 18th-century historian by the steward of the manor at the time, leads some modern scholars to conclude that it probably dates from the 17th century, and perhaps originated as political satire.

Regardless of its age, the Cerne Abbas Giant has become an important part of local culture and folklore, which often associates it with fertility. It is one of England’s best known hill figures and is a visitor attraction in the region.