Corfe Castle is a fortification standing above the village of the same name on the Isle of Purbeck. Built by William the Conqueror, the castle dates to the 11th century and commands a gap in the Purbeck Hills on the route between Wareham and Swanage.

The first phase was one of the earliest castles in England to be built at least partly using stone when the majority were built with earth and timber. Corfe Castle underwent major structural changes in the 12th and 13th centuries.

In 1572, Corfe Castle left the Crown’s control when Elizabeth I sold it to Sir Christopher Hatton. Sir John Bankes bought the castle in 1635, and was the owner during the English Civil War. His wife, Lady Mary Bankes, led the defence of the castle when it was twice besieged by Parliamentarian forces. The first siege, in 1643, was unsuccessful, but by 1645 Corfe was one of the last remaining royalist strongholds in southern England and fell to a siege ending in an assault. In March that year Corfe Castle was slighted on Parliament’s orders.

Owned by the National Trust, the castle is open to the public and is protected as a Grade I listed building and a Scheduled Ancient Monument. 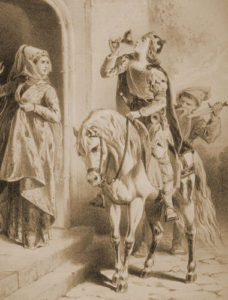 The hill on which the castle sits may have been a defensive site even in Roman times and the first castle buildings would have been built of wood. In 979 King Edward was reputedly murdered by his step-mother so that her own son Ethelred the Unready could become King of England. In the latter half of the 11th Century the Castle was rebuilt in stone by William the Conqueror and for the next six hundred years was a royal fortress used by the monarchs of England and latterly their constables.

By 1572 warfare had changed and Corfe Castle was sold by Queen Elizabeth I to Sir Christopher Hatton, her dancing master and favourite. In 1635 the Castle was bought by Sir John Bankes, who was Lord Chief Justice, as an occasional private residence.

As trouble brewed for Charles I, the Bankes family took up permanent residence. By 1643 most of Dorset was occupied by the Parliamentarians, and Lady Bankes and her supporters successfully withstood a six week long siege. Sir John Bankes died in 1644 and the family endured a series of half-hearted blockades by Parliamentary forces. Late in 1645 Colonel Bingham Governor of Poole started a second siege, and treachery by one of the garrison allowed a Parliamentary force into the castle in February 1646. The Roundheads allowed the family to leave the Castle and then it was systematically destroyed by Parliamentary sappers.

Sir Ralph Bankes, son of Sir John, built a new home, Kingston Lacy House, to the west of Wimborne and managed to gather together many of the plundered possessions to furnish the new house.

The Castle remained in the ownership of the Bankes family until 1982 when it was bequeathed as part of the Kingston Lacy and Corfe Castle Estate to the National Trust by Mr.H J R Bankes.