Badbury is one of Dorset’s eighteen Iron Age hillforts. And it’s one of the finest ~ rich in history, flora and fauna, the rings sit 100 metres above sea level and offer sweeping views across Dorset. 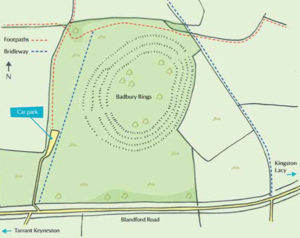 Badbury Rings is an Iron Age hill fort in east Dorset, originally the territory of the Durotriges. In the Roman times a temple was located immediately west of the fort, there was also a Romano-British town known as Vindocladia a short distance to the south-west.

Badbury Rings sits 327 feet (100 m) above sea level. There appears to have been two main phases of construction; the first covered 7.3 hectares (18 acres) and was defended by multiple ditches, while the second was more than twice the size, covering 16.6 ha (41 acres) and defended by a single ditch and rampart. Bronze Age round barrows in the vicinity demonstrate an earlier use of the area.

Until 1983 Badbury Rings was privately owned as part of the Kingston Lacy estate, and the owners discouraged investigation of the site. The site now belongs to the National Trust and a survey of the hillfort by the RCHME (Royal Commission on the Historical Monuments of England) was begun in 1993.

The summit area was cleared of undergrowth by the National Trust in 1997 and the conifer plantation was thinned out. This allowed the RCHME to complete the survey in 1998, which recorded 28 potential hut sites within the ramparts, although some depressions are probably caused by uprooted trees. The first excavations, led by Martin Papworth, took place in 2004, when three evaluation trenches were dug. Almost all of the pottery found was dated to the Late Iron Age. The current evidence does not suggest that the hillfort was a principal settlement in the Early Iron Age. It seems likely that the hillfort became depopulated towards the end of the Late Iron Age, perhaps as the Vindocladia settlement near Shapwick developed.

Badbury Rings is the fifth in a series of Iron Age earthworks, starting from Hambledon Hill, and also including Hod Hill, Spetisbury Rings, Buzbury Rings, Badbury Rings and Dudsbury Camp. The Iron Age port at Hengistbury Head forms a final Iron Age monument in this small chain of sites.

Vindocladia ~ a short distance (1.5 km, 1 mile) to the southwest of Badbury Rings, between the hillfort and the modern village of Shapwick, lay a small Romano-British town , believed to be that listed in the Antonine Itinerary as Vindocladia (from Brittonic *windos “white” + *klādiyos “ditch, earthwork”). In the later Roman period, a small fort was also established on the east side of the town. The fort was only discovered in 1975 and the existence of the town only came to light in the 1990s!

Location: Badbury Rings is well signposted just off the B3082 between Wimborne Minster and Blandford Forum. There is a large car-park. Restricted access for cars only (no overnight camping).

Hardy's Wessex, the landscapes that inspired a writer (Dorchester)
Dorchester

Hardy's Wessex, the landscapes that inspired a writer (Poole)
Poole

Gallery by the Lakes: Flight An Exhbition of Birds
Dorchester
Add your Dorset Events for FREE!